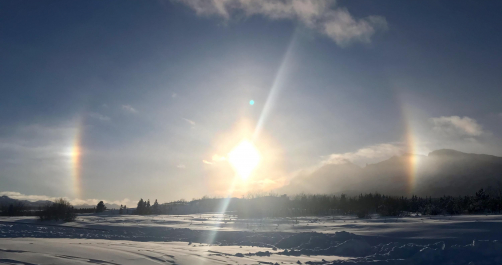 This has been a very mild winter for us.  For those familiar with the northern Rockies area, that is a fairly unusual thing to hear about us.  Our January was warm and dry, and was a welcome respite from the past couple of years where we’ve been pummeled with nasty winter weather.

That all changed in early February when our temps dropped about 50 degrees in a day.  We went from hovering in the 40’s to -15 and gradually dropped even further to some nights bottoming out around -35F.  Our daytime “high” temps ranged around -15F.  This country has a well deserved reputation for being quite open to extremes, and it seems like things get most interesting during these periods.

I’ve noticed in the past a particularly odd phenomenon when we have super cold temperatures, particularly in the valley floor areas where the cold air settles.  It’s called the Winter Halo or Ice Halo.  This is event happens when the weak winter sun, often low on the horizon, creates a circular rainbow around the sun.  It’s essentially the same effect observed with a common summer rainbow after the storm – which is caused by water droplets suspended in the air - but in this case it’s caused by ice crystals suspended instead in the air instead of water.  The particular orientation and even dimensions cause different optical effects.  Just this past weekend I saw it again, as we cross Marias Pass near Glacier Park on US2.  We were on the way to Kalispell and as clouds parted over Glacier a multi-colored ring appeared circling the sun.  It’s a rare and impressive sight.  Most times I’ve seen the ice halo has been mornings when the temps are at least -25F.  On Marias Pass it was that cold but it was afternoon. What seems to make this effect is really cold air which freezes all moisture in the air and sort of holds it there. 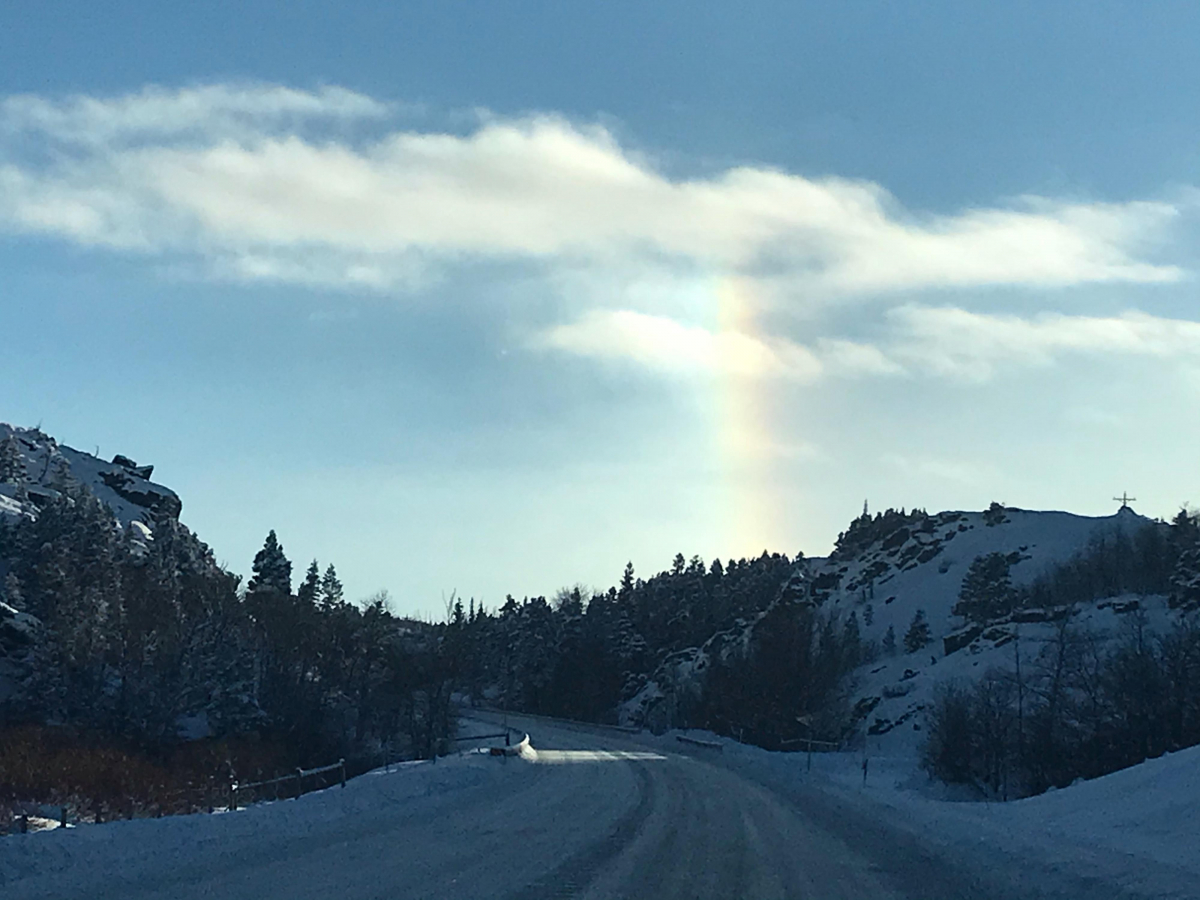 To get the ice halo, the suspended ice crystals will have a random orientation in the air, naturally leading to random light dispersion.  Curiously enough, if the ice crystals have a predominantly horizontal orientation, you can get a “sun spear” or light pilar effect – equally stunning and rare.  I’ve not seen these in mountainous conditions.  The ice itself has predictable refraction characteristics, and in the case of the ice halo it naturally orients itself to appear that no light is dispersed into the center of the ring, only outwards, with the refracted light appearing to us to be a rainbow-ring around the sun.  In dead-calm conditions it can maintain for hours.

Ice halos can appear anywhere the conditions align, but it appears the phenomenon occurs most frequently in places that somewhat resemble northern Montana in the winter.  Places like Nepal, Antarctica, Scandinavia, Siberia.  Not exactly places I like to think we mirror, but I guess given this most recent arctic express, and the frequency we get them it’s probably a realistic semblance.